Grab your favorite bud and enjoy the unofficial official Star Wars holiday! What do Star Wars and cannabis have in common? Other than “death sticks” obviously being joints in a galaxy far, far away, the series is arguably best watched while enjoying your favorite THC product.

With an enormous following, strange character names, and even stranger place names, it makes sense that there would be many different marijuana strains that take their names from the Star Wars universe, like Skywalker OG, Yoda Kush, and Death Star. Legend has it that George Lucas came up with the name of Chewbacca’s race – Wookiees – while hanging out with his friend Bill Wookey and smoking marijuana.  Lucas joked, “I think I just ran over a Wookey back there”, and the “Wookiee” race was born. Don’t be a half-witted, scruffy-looking nerf herder and check out The Fresh Toast’s article discussing some of the righteous Star Wars-inspired bud here.

Ever wonder “what in the blazes” each of your favorite Star Wars characters would choose to enjoy cannabis? Merry Jane posted an article speculating on this very subject. We think the Wookiee would want a cookie, but you can read their article here and see if you agree.

Take a look at Bloom’s May the Fourth Be With You specials, then jump on your Skiff and pick it up curbside. 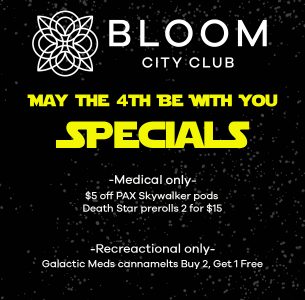 Have Disney+? The Rise of Skywalker arrives on the platform Monday. It sounds like it just might be the perfect time to pick up your favorite Star Wars inspired cannabis and start binge-watching all nine films. It’s a daunting task, and if you can’t do it all in one day, you can always finish on Revenge of the Fifth. It might not count as the official Star Wars Day, but the Force (and Bloom City Club) will be with you, always.